This fruit salsa with cinnamon crisps is perfect for Weight Watchers! It’s a healthy recipe that is easy to make.

It’s also very versatile. You can have it for a snack, dessert or even an appetizer for a party.

You can also switch up the fruit if you want. I’ve had it with kiwi (instead of the peach) and I’ve also added melon to it.

To make the cinnamon crisps I used Ole High Fiber Tortillas. I use them all the time, they taste good and they are only 1 point per tortilla.

I cut the tortillas into triangles, then I lined put them on a baking sheet.

In a small bowl I mixed together the Splenda and cinnamon.

Next, I sprayed the tortillas with cooking spray and sprinkled them with the cinnamon mixture.

I flipped them over and repeated it on the other side.

I baked them in the oven for 8 minutes. While those were baking I got the fruit salsa started.

The fruit for the salsa I used was strawberries, raspberries, an apple and peach.

Since I wanted to make sure the apple didn’t get brown, I peeled the apple and cut it into small pieces. I added it to a mixing bowl then squeezed a tablespoon of lemon juice onto it.

After that I cut the strawberries and peach into small pieces and added it to the bowl.

The raspberries I cut in half and added them to the bowl. Once you start stirring together the fruit the raspberries will bread down into smaller pieces.

Next I added Smucker’s sugar free strawberry jam to the fruit. To make it easier to spread I put it in the microwave for 10 seconds.

I added the jam to the fruit and stirred it up.

That’s all there is to it! The fruit salsa and cinnamon crisps were ready to eat.

If you don’t eat all of the cinnamon crisps you can save them in an airtight container for a few days. 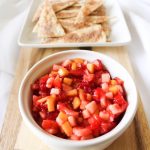