These Mini Banana Cream Pies are deeeeeeeelicious! And perfect for portion control!

You can have two of these mini pies for 3 points with blue, green and purple.

Personally, I love banana cream pie. When I was a kid I didn’t like pie at all. Not even apple pie!

The only pie I would eat when I was younger was pumpkin pie. And I wouldn’t eat the crust, only the pie filling.

I swear I was the pickiest eater when I was a kid! I didn’t even like apple pie.

If you don’t have a mini cupcake pan you can use a regular size cupcake pan. If you do that it will only make 12 mini banana cream pies. Each one would be 3 points.

To lighten up these mini banana cream pies I started by reducing the butter. I only used 2 tablespoons of butter for the crust.

You can use a food processor to turn the Nilla Wafers into crumbs or you can put them in a plastic baggie and use a rolling pin.

Since I reduced the butter the crust isn’t as “solid”. I was extra careful with the pie crust when I removed it after it was baked.

I’ll tell you my trick. First, I made sure to spray the pan with no-stick cooking spray.

After the crust was baked I let it cool. Then I put paper towel over the pan and flipped it up side down. Most of the mini crusts came right out.

Just make sure you are very gentle when handling the crusts.

I also lightened these mini pies up by using sugar free, fat free vanilla pudding and I used skim milk to make it.

Overall these Mini Banana Cream Pies were a total success! 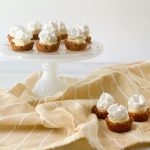