Did you know that one Pillsbury Grands Cinnamon Roll is 12 WW Freestyle points!?

That’s a lot of points!!

I love to have cinnamon rolls on the weekend for breakfast. Not wanting to miss out on my cinnamon rolls, I used the two ingredient dough to make them.

These cinnamon rolls are only 2 Freestyle points each! That’s a huge difference.

Click here to view your WW Personal Points and track it on your app.

The only thing about the two ingredient dough is that it can be kind of sticky when you’re working with it. I have learned a few tricks to help work with the dough.

One tool for me that is a must is a dough scraper. It makes it very easy to scrape the dough up, especially when you have to toll the dough up.

I also spray a little bit of no-stick cooking spray on my hands when I’m working with the dough.

To make these cinnamon rolls I rolled out the dough into a rectangular shape. I used my dough scraper to cut off any extra dough.

It doesn’t have to be a perfect rectangle since you’ll be rolling it up. I melted 1 tablespoon of butter and used a pastry brush to spread the butter all over the dough.

Next, I mixed together granulated Splenda and cinnamon and sprinkled it over the dough.

Once that was done I started rolling up the dough. This is when the dough scraper comes in handy.

If the dough starts to stick to the dough scraper you can spray it with a little no-stick cooking spray.

After the dough was rolled up I cut it into 10 pieces, then put it in a baking dish.

I used my pastry brush to spread egg wash onto the cinnamon rolls. Then they were off to the oven for 25 minutes.

A cinnamon roll wouldn’t be complete without some type of glaze over them. I mixed together some powdered sugar and skim milk, then drizzled that over them. It’s a perfect weekend breakfast! 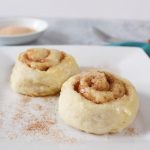 Click here to view your WW Personal Points and track it on your app.